Epidurals and spinals are both forms of ‘regional anaesthesia’. They both aim to prevent pain sensations from being felt in the lower ‘region’ of the body. 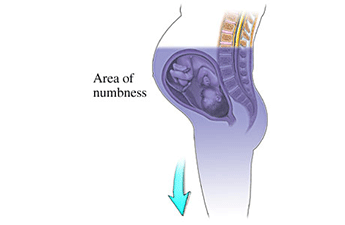 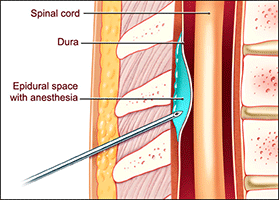 With an epidural, the epidural needle is inserted only as far as the epidural space. This space is located just outside a layer of tissue called the ‘dura mater’. The dura mater tissue encases the spinal cord and spinal fluid.

Once the needle is believed to be in the correct location, a fine hollow tube or ‘catheter’ (about the width of fishing line) is passed through the hollow needle, so that the end of the tube rests in the epidural space. The epidural needle is then removed and the catheter is left in place. The catheter is about 90cm long and the remainder of the tube is eventually taped in place, up the length of the woman’s back.

The anaesthetic medication is then injected down the catheter to ‘bathe’ the nerves that lead to the woman’s uterus and lower body, to numb them. 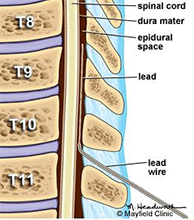 Epidural medication(s) generally take about 10 to 30 minutes to relieve the pain and last for 1 – 2 hours. 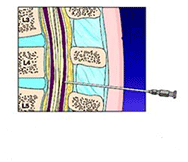 Spinal medication(s) only take about 5 to 10 minutes to relieve the pain and can last for 1 – 2 hours.

A spinal is a ‘once only’ procedure subsequent injections cannot be administered and there is no catheter is left in place to give further ‘top ups’ (like an epidural). This is why a spinal tends to be used more for Caesareans rather than for pain relief in labour.

The Availability of epidurals

Epidurals for labour pain are only administered in delivery suites of public and private hospitals. They are not available for women labouring in birth centres or at home.
Epidurals need to be inserted by an anaesthetist. Anaesthetist doctors are available 24 hours a day. However, depending on how busy they are, they may take minutes to be available for the epidural or if the they need to come in from home or is attending another patient or is in the operating theatre with a Caesarean birth, their services may be delayed.

Epidurals can be used in labour for many reasons:

The most common reason for a woman to request an epidural is for pain relief which is usually given in the active first stage of the labour (when the cervix is opening or dilating past 3 – 5 cm, but before 10 cm).

An epidural is rarely inserted for pain relief in pre-labour or in the early 1st stage of labour, because it is likely to slow down the labour. This means that an oxytocin drip to augment the contractions would then be needed. An epidural is also not usually inserted for pain relief after the woman’s cervix is fully dilated to 10cms (meaning she is in the 2nd stage or the pushing phase of the labour) as this is likely to inhibit her ability to push her baby out, requiring a 1 to 2 hour delay in the pushing phase or, alternatively, a ventouse or forceps birth.

The sensation of needing to urinate is diminished, which often requires the placement of a urinary catheter for the duration of the epidural

Epidural analgesia is a relatively safe method of relieving pain in labor. It provides rapid pain relief in most cases. It is more effective than nitrous oxide, opioids, TENS, and other common modalities of analgesia in childbirth.

Some researchers claim that it is correlated with an increased chance of operational intervention. The clinical research data on this topic is conflicting.

Complications of epidural use

Effects on the baby

Cost involved in having Epidural or Spinal anaesthetics

Your queries are best answered over the phone, our friendly reception staff would be happy to assist you with your enquiry, contact us on +02 8824 4998